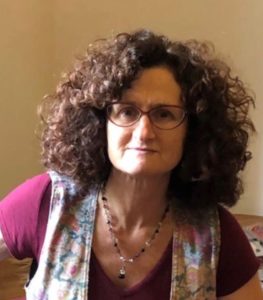 Sue Cooper is a Clinical Psychologist with extensive experience as a psychoanalytic psychotherapist, working in private practice in Cape Town since the early 1990s. She has a long-standing interest in the interface between psychological and spiritual approaches to self-discovery and inner healing, and has attended Buddhist meditation retreats, mainly in the Theravada tradition, for over 30 years, both in South Africa and at Gaia House in the UK. Sue has been inspired by the teachings of Ajahn Chah of the Thai Forest Tradition, and is deeply grateful to her primary teachers: Godwin Samararatne, Kittisaro and Thanissara, Ajahn Sucitto, Stephen and Martine Batchelor and Guy Armstrong.

In 2010, Sue created and launched her “Open the Heart and Still the Mind” courses and retreats, which integrate Buddhist meditation and psychotherapy. She has a particular interest in exploring how our practice enables us to embrace our humanness, integrating love and loss in our lives, so that we can live and die with compassionate awareness.

Sue offers weekend and longer silent retreats throughout South Africa at Somerset Gift Getaway Farm, Temenos Retreat Centre and Mont Fleur Conference Centre in the Western Cape, Dharmagiri Sacred Mountain Retreat and The Buddhist Retreat Centre in KwaZuluNatal and Emoyeni Retreat Centre in the North West Province. In addition to offering on-going weekly “Open the Heart and Still the Mind” groups and monthly half-day or day-long retreats in Cape Town and Stellenbosch, Sue teaches meditation and mindfulness in the Leadership Module of the Masters in Development Policy and Practice at the Nelson Mandela School of Public Governance at UCT.

We use cookies and other tracking technologies to enable essential services and functionality on our site, to assist with navigation, to provide social media features and security, and to analyse your use of our website.ACCEPT & CLOSELEARN MORE